Men are more vulnerable than women, and young people are reporting more loneliness in the newest large-scale study on loneliness

A new study has been published in the scientific journal Personality and Individual Differences (Barreto et al., 2020), suggesting that for industrialized countries, loneliness is one of the fastest-growing social and health concerns.

Study participants took part in the BBC Loneliness Experiment, an online survey launched on BBC Radio 4 and BBC World Service. Overall, more than 46,000 volunteers between 16 and 99 years old from 237 countries contributed to the study.

Some of the findings in this worldwide study on loneliness:

This might suggest that the problem of loneliness is getting worse over time.

As our culture changes and with traditional social media networks making loneliness worse (see our image at the bottom of this blog post) - it seems like an intervention is needed more now than ever.

2. Men are Lonelier than Women

While all genders experience loneliness, men across all ages report a slight increase in loneliness over women. This is interesting to us at FriendMatch, as we are the only friendship service that caters to all genders - many of the other popular friendship apps cater only to women. FriendMatch has also done our own study demonstrating that our own members are just as interested in making friends with someone from another gender as from their own gender - it is clear from the BBC study that we need to bring this kind of service to more people across more categories.

3. Your Country Affects Your Loneliness Levels

Do you live in an individualistic society, where your individual success is a more important life goal than the needs of a larger group such as your extended family?  In these types of societies, which included countries such as the United States and the United Kingdom, more frequent loneliness was reported in the study than people living in more collectivistic societies (such as Guatemala).

Interestingly, a couple years back, the U.S. Surgeon General declared loneliness a health epidemic in the country, and in the U.K., a Minister of Loneliness has been appointed.

For more information and statistics about loneliness, check out our fact sheets below: 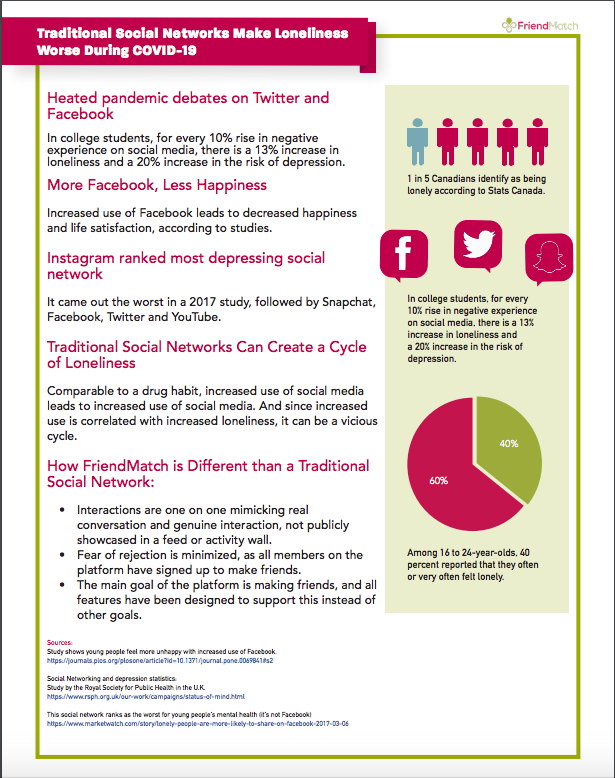 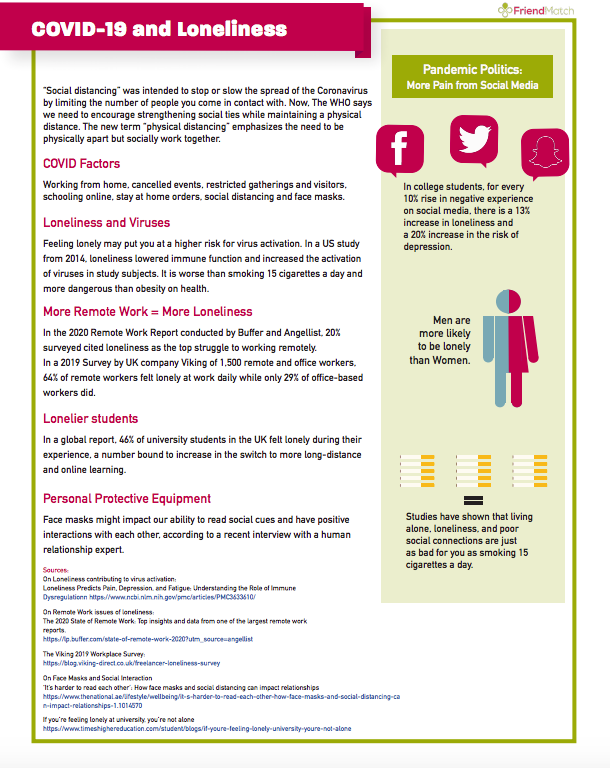 Tweet
How do you feel about this post?
Happy (3)
Love (1)
Surprised (1)
Sad (1)
Angry (0)
Try a New Hobby with Your Friends - some ideas
News Release: The Massive Social Network You Haven...

Direct Link
Finding New Friends Takes Over Traditional Social Apps
How I made my first friend online
Spend Valentine's Day with Friends! Some Ideas..
5 Ways to Stay Social in a Lockdown
5 Tips for an Online Shower Party
Ideas to add Flair to Your Friendsgiving
Halloween 2020 with Friends
Beyond Friendship bracelets - gifts for bffs
What to do when you feel lonely
Things you and your friends can do from the comfort of your own couch
About FriendMatch